I just wanted to thank everyone for participating in The Vancouver Women in Film Festival!


Check back periodically for new updates, and more information about next years festival!
Posted by Women in Film and Television 0 comments

You want pictures? YOU WANT PICTURES?!

Click here to see all of the amazing photos taken throughout the film festival!
Posted by Women in Film and Television 0 comments

This article has been translated from French to English, so, mind the grammar.
If you are one of the lucky who speak our other national language, click here for the french article!


Like every year for six years, the Women in Film Festival will honor women's 4 to 6 March the Vancity Theatre in Vancouver. French cinema will be present with three films in French.


Since 2004, the Women in Film Festival presents films made by women on women's issues. For the Women in Film & Television Vancouver (WIFTV) who created this festival, it is to showcase the film and women and give them professional recognition.
This nonprofit organization is part of the Women in Film & Television International has over 10,000 members worldwide. Its role is to promote the participation of women in key positions in the film industry and television. This sector is, in fact, still largely male.
"Women who work on movie sets are often relegated to positions of makeup, styling or catering. Those of them who are producers or writers have more difficulties to be employed than men and were also less likely to see their projects get funding, "says Roslyn Muir, Festival Director.
According to a study by Martha Dr. Martha M. Lauzen, director of research center on women in film and television from the University of San Diego, women represented only 16% of all directors, producers, scriptwriters and editors who worked on the 250 films that have the most money in the United States in 2009.
It is to help women climb the ladder in the area that WIFTV holds regular networking events, workshops and of course the festival, which attracts an average of 1,200 spectators. Give more visibility to directors allows them to advance their careers. For example, Katrin Bowen saw his short film selected by the festival a few years ago. Since then she has directed a feature film, Amazon Falls, it will present at the close of the festival Sunday, March 5.
45 short and feature films will be offered during the 3 days during the festival. They were chosen by a committee from among 150 films. To be eligible, films must have involved women on at least three of the following positions: director, lead actor, producer, screenwriter, editor and cinematographer.
This year the festival has focused on multiculturalism, including three short films francophones. Several indigenous films will also be presented on Sunday morning, one of them, The Cave, was selected at the last Sundance Festival. ■

Anne Emond, director Sophie Lavoie.
This young filmmaker Quebec has already produced seven short films and is in post-production on his first feature film due out this year. If being a woman has not closed doors for now, Anne Emond is well aware that this may be more complicated in the future: "If I want to make movies bigger, perhaps it will be a problem in the minds of investors. She notes that women are still less present on the sets of commercials, television series and films with big budgets than on others. But she remains optimistic. "It will get better and better because there are more and more styles of women directors in Quebec and around the world, like Sofia Coppola or Mia Hansen-Love. "■
Colette Balcaen, director of Mother Earth, shut up.
In this short film, Colette Balcaen, who will attend the festival, talking about a subject dear to his heart: the environment. It shows the evolution of the land of his great-grandparents in Saskatchewan once rich and fertile, and now worn out and tired by oil wells which dot. The retired school teacher became an artist came to cinema by the art and the achievement of performances and installations that have often led to movies. Very surprised and happy that his first film to be selected at a festival, Colette Balcaen think this experience will lead him to further develop this aspect of its creation. ■

Caroline Monnet, director of Ikwe.
Young Manitobans 25 years of Algonquin origin through his mother, Caroline Monnet presents 2 films at the festival Women in Film. Two short films that address the issue of indigenous people. Ikwe, which received the Jury Prize Contest Roots organized by Radio-Canada, is a conversation between Ikwe, a francophone, and the moon speaks Cree. Making sense despite differences in language, this dialogue will enable Ikwe to know where it comes from. Tashina said the isolation of a young Aboriginal come from northern Manitoba to Winnipeg to study. If Caroline Monnet feels no male dominance in the film industry as a brake, she recognizes that women of her generation owe to those who preceded them. "It's now easier for us than it was 10 or 20 years. [...] It's a passion, we will continue to do so even if it is ruled by men. 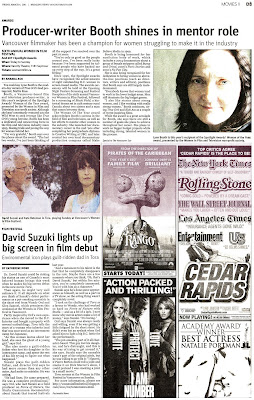 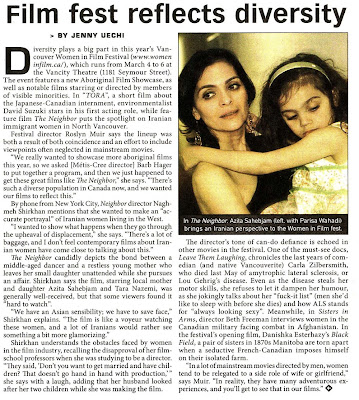 Thank you to the Vancouver Sun and the Georgia Straight for keeping it awesome all the time!
Posted by Women in Film and Television 0 comments

Posted by Women in Film and Television 0 comments

Great news! Sara Canning, the star of Black Field, is flying to Vancouver attended our opening night screening. Sara is currently in Atlantashooting her hit CW television series The Vampire Diaries. But she came to hang out in Vancouver at our festival! How exciting is that! 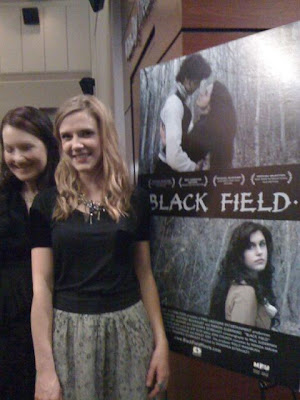 Read more about her here:
http://www.imdb.com/name/nm3048050/http://en.wikipedia.org/wiki/Sara_Canning
Posted by Women in Film and Television 0 comments

This year's Spotlight Award recipients include:

Woman of the Year
Producer Lynn Booth of Make Believe Media has worked extensively in documentary film and television, including shows such as The Whistleblower , Corporations in the Classroom , and The Devil You Know . She is being recognized for her commitment to hiring women in above-the-line positions, such as directors, writers, and editors.


Artistic Achievement Award
Katrin Bowen made her feature film directorial debut with Amazon Falls , about a fading B-movie actor (played by April Telek) who refuses to give up on her Hollywood dreams. Telek won the WIFTV Artistic Merit Award at last year's Vancouver International Film Festival.


WIFTV Artistic Innovation Award
Animator and filmmaker Ann Marie Fleming will receive this new award to recognize her body of work, which includes The Magical Life of Long Tack Sam , The French Guy , and her short film "I Was a Child of Holocaust Survivors", which was selected as part of Canada's Top Ten 2010.


Wayne Black Service Award
This year's award goes to Dusty Kelly for her extensive volunteer work for numerous industry organization, including her work on the BCIFP Women's Initiative Steering Committee and her mentoring of new filmmakers.


Honourary Friend
Alexandra Raffle will be honoured for her commitment to hiring women in above-the-line positions on her new TV series Endgame and her twenty years of mentoring women in the industry.


Kodak Image Award
This year's cinematography award goes to Lindsay George for her work on over 14 projects in the past five years, including A Night For Dying Tigers .


PleaseAdjustYourSet.com Award
The winner of this new award, Rina Fraticelli, created a national association of female professionals called Women in View and spearheaded the international conference SexMoneyMedia held in Vancouver last October. She has also worked as executive producer of both the National Film Board's Pacific and Yukon Studio and Studio D.